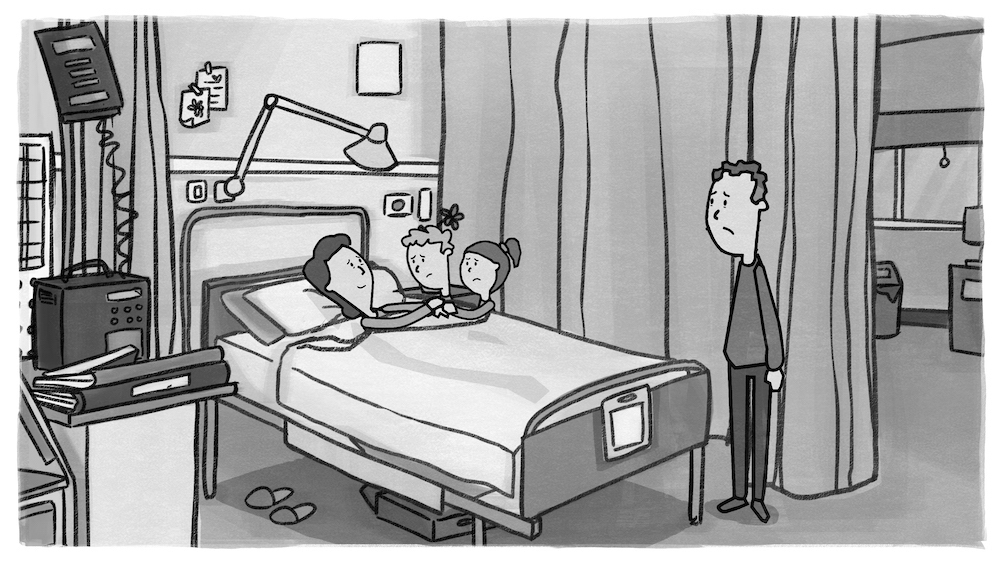 This case study is a behind the scenes look at how we developed the ‘Close To Home’ campaign, including charity animation videos to fulfil our client’s objectives. Ultimately this animation work helped us to increase results while coming under budget.

Home-Start Central Bedfordshire is one of the charitable causes I have been supporting for many years. The charity is a voluntary organisation servicing Central Bedfordshire and Luton. Home-Start’s volunteers provide practical and emotional support to struggling families with at least one child under the age of 5.

I had also been tasked with designing the charity’s annual report. However, after discussions with staff, we know that the annual report’s main purpose was for showing impact to key stakeholders as well as the charity commission. Staff were also aware that many of these stakeholders would not effectively ‘consume’ the information contained within.

Another problem I faced was with safeguarding. It would be difficult to get real-life imagery and photography to highlight issues without breaching the charity’s safeguarding policies.

I developed the ‘Close to Home’ campaign; an Annual Report and marketing campaign to raise awareness of the charity and its services/impact locally. Instead of real-life video and photography, we used animation. At the time, I had reviewed other adverts that were running in the client’s service area; none were animated. It was decided that animated films would give a better chance of standing out from the crowd.

The campaign consisted of a series of short animations, each focusing on a specific area for which the charity wanted to raise awareness. These charity animations were stories based on real scenarios from service users. Statistics used within the annual report were included at the beginning and end of the videos. This helped communicate a consistent narrative across all the videos – What life was like before Home-Start’s support (the problem) through to what life was like with Home-Start’s support (showing Home-Start as part of the solution).

I chose the theme ‘Close to Home’ in order to emphasise that similar stories are happening in the audience’s towns, villages and streets. While the animations all focused on different topics, they are all set in the same street.

To make the videos, I worked closely with Matt Waruszynski, a talented animator who has worked on projects for Yamaha and E4. I have known Matt now for a number of years and call on his expertise when character design is needed in videos for charities. Once I had created scripts, Matt turned these into storyboards to work from. Storyboarding was key to get sign-off from the charity prior to time being invested in character animation.

“Home-Start is definitely one of my favourite charitable initiatives. I think that animation works well for charities like this because you can communicate difficult and challenging subject matter in an engaging and thought-provoking way. Animation can often allow you more freedom to push boundaries and expectations in a way that you might not be able to with live-action. It has been a great experience to help bring these really powerful Home-Start stories to life on screen.” – Matt Waruszynski, Rocket Cow Animation.

Some of the subject matters, such as domestic abuse, were very difficult to tackle visually. We found that charity animation offered an excellent tool to deal with the issues in a sensitive but engaging way. Utilising animation allowed us to avoid safeguarding issues almost entirely.

The annual report itself was structured in a similar way, as a series of stories to reinforce the campaign. Together, this made the Annual Report effective rather than just a technical requirement. I believe that this is how all annual reports should be.

The animated videos were pushed to the audience using social media platforms (Facebook and Youtube). I ran targeted Facebook and Youtube advertisements. A printed version of the annual report was distributed. During the client’s yearly open morning, a copy of this was handed out, and the videos played.

Here is one of the completed animations:

On the ground, the charity noticed those who had seen the campaign had a much better understanding of their cause and services.

“In relation to our ‘Close to Home’ campaign, the communications have resonated both internally and externally. As an organisation, our staff and volunteers are more aware now than ever of the range of issues we cover and understanding how this affects the individual going through the situation. The advertising campaign has provided the best results since we were established in 1984. We are continuing to utilise the videos in presentations as they work so well. We have found that the videos help to ‘humanise’ abstract issues that many have not personally experienced, for example, at our open morning some of the viewers got very emotional when watching the charity animations.” – Home-Start Central Bedfordshire.